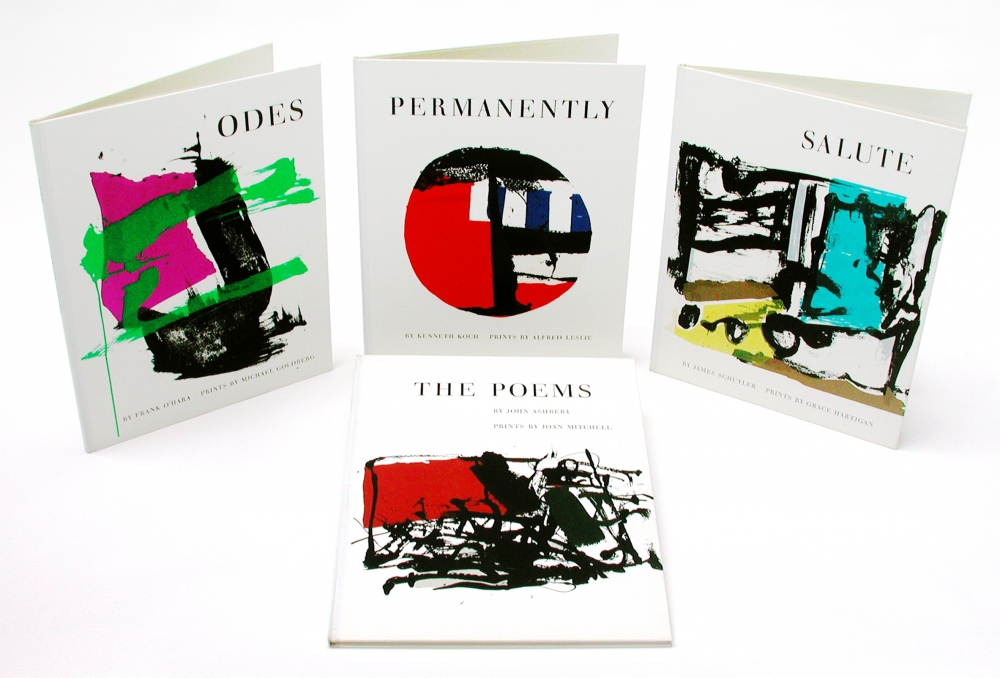 In 1960, Tiber Press published an extraordinary set of artists' books, pairing New York School painters Joan Mitchell, Alfred Leslie, Michael Goldberg and Grace Hartigan with renowned poets John Ashbery, Kenneth Koch, Frank O'Hara and James Schuyler. This publication is considered one of the most significant collaborations between artists and poets of the era.

Each volume consists of forty pages and contains five prints: one on the cover, one on the title page and three interspersed throughout the book. The prints were made directly on the screens by the artists, and the text was handset and printed by Brüder Hartmann in West Berlin on handmade Hahnemühle paper. The set was created in an edition of 200 numbered copies, signed by the poets and painters. All four volumes are jacketed in molded acetate and boxed together in a linen slipcase.

Tiber Press was founded in 1953 by Floriano Vecchi, Richard Miller and Daisy Aldan to promote collaboration between poets and artists of the New York School. Their principal project was this limited edition set, which is considered one of the key American artists' books. The choice of partners was left to the artists and writers themselves. In doing so, each pair acknowledged a commonality in their work. For Joan Mitchell and Michael Goldberg, it was their first exercise in printmaking. For John Schuyler, it was his first collection of poems. The artists and poets featured in this Set went on to become the giants in their field, representing a period of innovation, experimentation and collaboration.