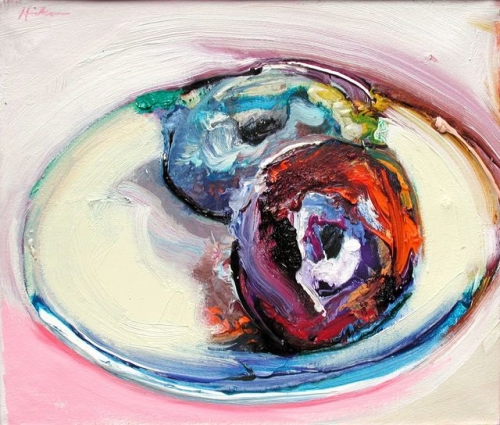 Famous for his lush renderings of pastries, Wayne Thiebaud once exclaimed: “Cakes, they are glorious, they are like toys.” This comparison to toys, which can also be found among his oeuvre, reflects the pleasure Thiebaud had found in playing with these culinary treats—in paintings, prints, and drawings. In his zeal to paint cakes, pies, candies, and various other treats, Thiebaud emulated frosting (and other sugary substances) in thick, slick brushstrokes, effectively translating his rich subjects to two-dimensional, purely visual entities. As a result, the artist established a legacy of conjuring tasty treats, and has inspired countless other artists to follow his lead.

“Confections,” a recent group show at New York’s Allan Stone Projects (whose proprietor, Allan Stone, is an old friend of the artist and has shown his works at the gallery since the ’60s), gathered a handful of artists—Emily Eveleth,Derrick Guild, Richard Hickam, Don Nice, and Lorraine Shemesh—who have done just this. In these works the artists not only depicted dessert—particularly doughnuts—but also transformed them into vital objects.

In Policeman’s Ball (2000), Richard Hickman presents a full spectrum of color in a painting of two doughnuts sitting on a plate. His liberal, lively swirls of color combine to form the dense rings, exemplifying the artist’s keen ability with color and facility with paint. Don Nice takes a different approach to the same subject, applying careful crosshatching or colors, from deep purples and reds to bright yellows and oranges in order to develop a solitary chocolate-frosted doughnut. The work, Untitled (Doughnut) (1966), achieves dimensionality and appears almost real, but a bit too vibrant to be edible.

Painter Emily Eveleth also takes on the doughy delicacy in spare, minimal compositions, a realistic palette, and delicate light effects. Her series of powered sugar and jelly-filled varieties beautifully captures the weight of the ovoid forms in soft staccato brushstrokes, while conveying warmth and calm. Derrick Guild delves into other baked goods in photorealistic works like Iced Pastry (2002), Éclair (2002), and Custard Slice(2001); each one addresses with precision the cracks within their frosting and the textures of their creamy fillings. Presented together, the works transcend their subject matter, offering viewers a chance to observe each artist’s respective approach and style as they reinterpret these familiar, joyful subjects.