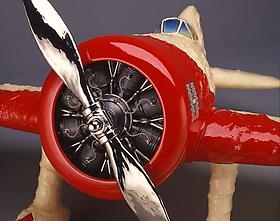 Allan Stone Projects is pleased to announce its participation in the Metro Show, January 23-26, 2014, with a program entitled Wunderkammer: Dennis Clive et al. Taking a cue from the Allan Stone Collection itself and Mr. Stone’s appetite for juxtaposing diverse objects of wonder in his gallery and homes, our booth will center on the imaginative, expressive and magnificently crafted works of visionary ceramic artist Dennis Clive.

“Wunderkammer” is a German term meaning “room of wonder.” Also called “curiosity cabinets,” these collections often incorporated objects from natural history, geology, ethnography, archeology, religious or historical relics, antiquities and works of art (including “cabinet paintings”) with particularly stirring visionary imagery or even bizarre or fantasy-like expressiveness. Such collections were precursors to museums, the earliest known pictorial record of which is an engraving Dell'Historia Naturale by Ferrante Imperato (Naples, 1599).

Mixing Pop and Funk Art sensibility with European portrait miniature, for the past five decades Dennis Clive has fashioned ceramic works that explore the symbols of American culture. Inspired by a dream, Clive began experimenting with clay while taking an elective arts class in college. Using the plastic, elastic and malleable characteristics of the material, he began creating highly detailed facsimiles of any and all types of vehicles – trucks, planes and automobiles – that satirize and celebrate the metal realities with bright-colors. Marvels at a distance, the true extent of Clive’s abilities are only visible close-up, when the scrutiny paid to details like undercarriages, windshield reflections, and the shapes of rivets, are most apparent. But the realism need not overshadow the inherent fragility of the clay and Clive’s ambitious uses of it. With a style that pays homage to Robert Arneson and the California Funk Art, Clive has carved his own niche. His sculptures echo the childhood of the American baby-boomers, who grew up with build-it-yourself models, the fading memories of WWII, and the “family automobile.”