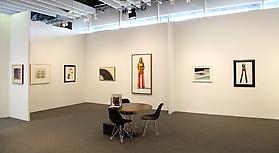 About the exhibition:
Selected from the Allan Stone Collection, the exhibition includes over a dozen paintings, works on paper and prints spanning the artist’s full range of subjects, from 1961 to 1995. Highlights include paintings such as seminal still lives Half Salmon, 1961, and Bolt Cutters, 1972; a monumental figurative work Girl in Striped Blouse, 1973-1975; a dramatic cityscape Freeway Curve, 1995; and works on paper such as Barbecue Beef, 1966, Bow Tie, Pick and Shoe, 1972, and Italian Desserts, 1986.

Because his most celebrated imagery originated from mass-produced commercial goods, Thiebaud has been associated with the Pop art movement of the 1960s. However, the reverence and sense of nostalgia with which he conveys his subjects defies such facile categorization. “Thiebaud’s method…has the effect not of eliminating the Pop resonance of his subjects but of slowing down and chastening the associations they evoke, so that a host of ambivalent feelings—nostalgic and satiric and elegiac—can come back later, calmed down and contemplative: enlightened.”(1)

The diversity of methods and materials in the works on view demonstrate the great dexterity consistent in Wayne Thiebaud’s work over the decades since Allan Stone first exhibited him in 1962. From that watershed event, Thiebaud rose to his current prominence with over 20 solo exhibitions at the Allan Stone Gallery. This exhibition reflects Stone’s long dedication to Thiebaud as mentor, adviser, dealer, friend and enthusiastic collector. Not only do the works in this exhibition expound on Thiebaud’s signature motifs—objects and figures limned in color against ambiguous backgrounds, and inventive city and landscape scenes—they also convey the range of process, ingenuity and specificity that distinguishes each of Thiebaud’s works. As Thiebaud’s primary dealer for most of his career, Stone celebrated this range, eschewing any categorical partiality and embracing these marvelous works for their intrinsic mastery.

Wayne Thiebaud was born in Mesa, Arizona in 1920. While still in high school, he worked at Walt Disney Studios and later was an artist and cartoonist for the U.S. Air Force. Thiebaud attended San Jose State College (now San Jose State University), followed by Sacramento State College (now California State University, Sacramento), where he received his BA in 1951 and his MA in 1952. He has taught at the University of California at Davis since 1960. Thiebaud received the National Medal for Arts Presidential Award for Teaching from President Clinton in 1994, a 2001 Lifetime Achievement Award from the American Academy of Design, and a 2007 Bay Area Treasure Award from the San Francisco Museum of Modern Art. Thiebaud has been honored with gallery and museum exhibitions almost every year since 1960. Wayne Thiebaud, now 93, continues to paint in Sacramento, California.