Baribeau grew up on a farm in Oregon and worked for a landscape architect while in college. The memory of those experiences remains in his aesthetic. Baribeau’s abstractions possess the formal qualities of landscape painting, yet offer a bold and kinetic re-imaging of this classical subject. As Donald Kuspit stated in Artforum, “Baribeau’s paintings are lyric responses to nature—to landscape, seen in all its purity, that is, as a complex of abstract ingredients (texture, color, shape) rather than as a particular scene.” With impasto touches and dynamic use of color, the resultant images do not immediately reveal themselves, compelling the viewer to engage on a level of continual discovery.

In the early 1980s, Allan Stone Gallery first exhibited Baribeau works that established his lifelong propensity to meld abstraction and landscape through an effusive application of paint. These works describe centralized forms resembling mountains piled upward to roof-like caps, or patchworks of brightly colored lozenges of paint, stacked like bricks or stones into peaks resembling huts or thatched roofs. Flecks and sprays of paint evidence the frenetic pace and torrents of activity that have typified his work since. Toward the late 1980s, pictographs and signs—x’s, hash tags, circles—began to mingle with the thick globs of paint, a kind of cartoony automatic writing that brought linearity into more loosely structured “all over” paintings.

Into the 1990s the pictographs and mounds coalesced into simplified house shapes and lollipop trees clustered into “villages” along horizons or stacked terraces. Often displaying blue skies and a playful pallet, these are some of the most upbeat, humorous and even sentimental of Baribeau’s works. Though still evocative of signs, trees, roads, maps, buildings, these more overt references began to morph organically into non-objective fields organized around plateau-like bands that have become one of his compositional hallmarks. Collage also began to appear in this period—striped and polka-dot patches of cloth, map fragments, paper ephemera, cardboard—as if debris from domestic and popular culture had begun to accumulate among the fields and mountains of his earlier works. This inclusion of found material led Baribeau to a body of heavily layered collages sandwiching thick and colorful paint with found materials and layers of plastic. In many of these, geometric forms like clusters of circuitry or architectural lattices hover above vividly colored spacial backdrops. Parallel to these works, Baribeau developed a series of black and white oil stick on paper works, reducing the same imagery to the barest elements and structures.

Since the early 2000s, Baribeau has expanded into several other series, among them his esteemed flower paintings, offering a telescopic view of the intricacies of his landscapes. His imagery has also morphed into paintings on cigar boxes engulfed in thick accumulations of paint and collage, projecting his vocabulary sculpturally into the viewer’s space.

Baribeau’s paintings reveal roots in the 1960s New York School, mingled with an appreciation for the sublime power inherent in nature adopted by the 1950s Mystical painters of his native Northwest. His Field series and Millbrook series on canvas and paper, with their thick, asymmetrical bands of color, conjure Richard Diebenkorn’s Berkeley paintings. The jaggedness of the brushstroke with horizontal lines dripping into one another, pooled acrylic medium and oil paint, and embedded scraps of cloth, recall Robert Rauschenberg’s Combines.

From his studio in the woods Baribeau expands this abstract language, translating wind, rain, light, cold and heat into spirited, uniquely personal visual statements. Instead of segmenting his influences, Baribeau merges them into a single entity all his own, creating what Michael Kimmelman calls, “vigorous pictures that convey the sheer pleasure in the handling of paint.” Baribeau’s work demonstrates a commitment to the very act and experience of painting that defines him as an artist.

Robert Baribeau was born in Oregon in 1949. Baribeau received his BS from Portland State University in 1978, and his MFA from the Pratt Institute in 1979. He has been honored with a Pollock-Krasner Foundation Grant, a National Endowment for the Arts Grant, a Pratt Institute Art Department Grant/Fellowship, and a Florence Saltzman-Heidel Foundation Grant. His work has been reviewed in Artforum, Artnews, The New York Times, The Sun and New York Magazine. He has been represented by the Allan Stone Gallery since 1979. Baribeau lives and works in Stanfordville, NY. 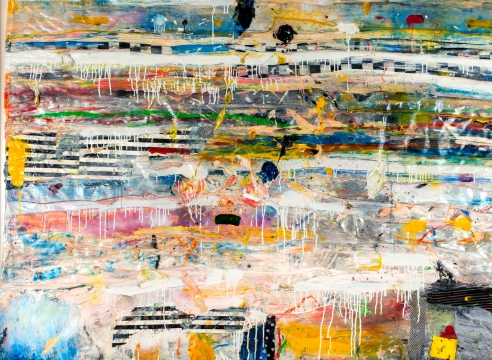