The Allan Stone Gallery is pleased to present Robert Arneson: Playing Dirty, November 1-December 21, 2012, an exhibition of approximately twenty-five early ceramic sculptures and paintings by this premier Funk Artist who elevated clay as a medium and changed the definition of art. A fully illustrated catalogue will be available featuring a previously unpublished lecture by Robert Arneson and an introduction by Arneson scholar Jonathan Fineberg.

Inspired by Peter Voulkos, Robert Arneson (1930-1992) rejected the idea that ceramic artists can produce only utilitarian or decorative items and, in the 1960s, began creating nonfunctional clay pieces—contradicting the more formal traditions previously associated with this medium. These objects included often facetious renditions of household wares, such as the sexualized teapots, anthropomorphic trophies, and non-utilitarian pots and bricks of this exhibition. These works demonstrate his early but enduring appetite for mischievousness and self-deprecation as a means to charge "mud" with meaning, a quality that compelled Allan Stone to give Arneson his first solo exhibitions in New York in 1964 and 1969. Arneson’s scrappy vocabulary of dark humor, pop-culture, impulsiveness and self-reference quickly attracted national attention and by the early 1970s he had established himself as a leader of the Funk Art movement in ceramics. From the early works highlighted in this show and throughout his career, his propensity for breaking rules and testing boundaries distinguished Arneson as a significant Post-War artist.

Robert Arneson was born in Benicia, CA in 1930. In Oakland, he attended the California College of Arts and Crafts and Mills College where he received an MFA in 1958. Arneson became head of the ceramics department at the University of California at Davis in 1962 and a full professor of art in 1973. He continued to teach and produce art until his death in 1992. He received honorary doctorates from the San Francisco Art Institute and the Rhode Island School of Design, and awards from the American Academy and Institute of Arts and Letters, and the American Craft Council. Arneson’s work is included in numerous museums and public collections around the world.

"The artist's early years are the focus of the exhibition's decidedly nondecorative sculptures dating back to the 1960s. Through irreverent, lumpy clay pieces, certainly more amusing than aesthetically pleasing, Arneson injects wry humor into the medium: A series of anthropomorphic jars and trophies have handles like spindly tentacles extending their sinister grasp; a cleat-shaped kettle is engraved with its title, Spiked Tea, 1969; the tip of a finger puzzingly pokes through one of the many clay bricks." (p. 98) 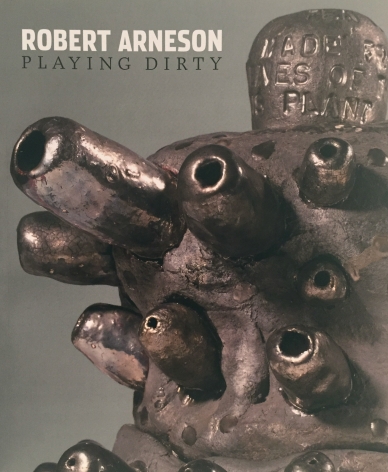