Allan Stone Projects is pleased to present Richard Hickam: Pinkie, Maude and Other Paintings on view from April 26 – June 9, 2018. Hickam's portraits reveal a dedication to gestural abstraction with an emphasis on emotional confrontation. His paintings of provocative characters illustrate the artist's penchant for raw figuration that is fundamental to his visual vocabulary. Originally interested in photorealism, Hickam pursued a looser approach to figuration in the 1980s. Influences of Fauvist Matisse as well as the loose angularity of early Diebenkorn are apparent in this period. Harkening to historical painters such as Chaim Soutine and Francis Bacon, and foreshadowing contemporary artists such as Dana Schutz or George Condo, Hickam reconciles feelings of detachment with a sense of compulsion in his evocative paintings.

We're pleased to share that Richard Hickam: Pinkie, Maude and Other Paintings is featured in this week's Artnet Must-See Guide: New York. 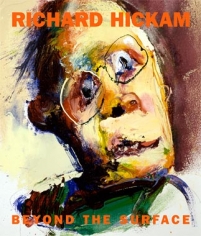 Richard Hickam
Beyond the Surface 2005